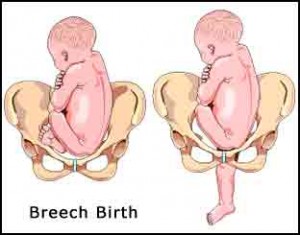 Breech birth is a very complex subject which needs in depth discussion with your care provider. I am lucky to have worked with one of the UK’s most experienced breech birth midwives, Mary Cronk, learning what I can about these unusual, but not abnormal  presentations. I have attended several breech births and taught alongside Mary Cronk, and Shawn Walker. I am happy to provide information and birth support for those carrying a breech presenting baby.

The Breech Birth Network run study days for health professionals and others wishing to learn more about spontaneous breech birth. This is a different set of skills to those needed to “Deliver” a breech baby which is a hands-on medical technique. Spontaneous breech birth is a hands off birth which can be facilitated by experienced midwives. The Royal College of Midwives consider this a normal type of birth.

Although breech is a normal presentation it carries additional risks compared with a head down birth. Breech babies are often born swiftly and spontaneously, but sometimes manouvers or surgery are needed to ensure baby is born safely. For this reason I recommend hospital birth with experienced care providers for breech presenting babies.

There are many things you can do to encourage a breech baby to turn see the brilliant spinning babies  website or the very funny pregnant chicken blog. The majority of babies who present as breech in pregnancy will turn head down by 36/37 weeks. If baby has not turned by 36/37 weeks of pregnancy you may be offered an External Cephalic Version (ECV) in hospital.

This ECV video  shows the technique used. The success rates (aprox 50%) vary with practitioner, whether it is your first baby, type of breech, how much fluid, size of baby etc. There is a small risk (1 in 200) of the baby becoming distressed during the procedure and needing immediate delivery by caesarean. More information is available here.

Breech babies can of course be born vaginally, but some doctors recommend caesarean surgery to deliver breech babies. Those doctors are probably basing their recommendation on the flawed Hannah trial (also called the Term Breech Trial or TBT) results. The TBT study seemed to indicate that babies born vaginally had worse outcomes than those born by caesarean, but when the outcomes were looked at 2 years later there were no differences in outcomes for the babies, but there are differences for the mother recovering from abdominal surgery. There have been many studies since, such as the PREMODA study (reported on at the 2012 breech birth conference) which show no differences in outcomes for breech babies born vaginally or by caesarean section. It is very important that you have a skilled midwife or doctor caring for you whichever type of birth you have.

The information and criteria which doctors use to determine who is a good candidate for sucessful vaginal birth can be found here. Please bear in mind that this green top guideline was published in 2006 and there has been lots of research done since then! I attended the International Breech Birth Conference in Washington DC in November 2012 and am eagerly awaiting the data soon to be published by Dr Frank Louven and his team in Frankfurt. See more information from the conference in Dr Rixa Freeze’s fantastic blog here.

A first baby born Frank Breech at home. Attended by a gentle doctor, this is a good illustration of spontaneous breech birth. The doctor does use a manouvre to help the baby’s head be born, and the baby doesn’t breathe immediately (this is fairly typical of breech born babies). You will notice how the doctor wisely does not cut the umbilical cord and how baby just requires stimulation to start breathing within a minute. Click here

A wonderful video of breech birth at home in water. It is the woman’s 4th baby and I can’t help wondering if baby would have got herself out sooner if the mother was in the supine position so buoyancy would have lifted baby’s body? The reverse of dry land breech birth, when the mother is on all fours and the baby descends aided by gravity. Anyway it’s a beautiful birth and a lesson to midwives that babies play an active part in the birth process.  You tube beautiful breech waterbirth

Another you tube film of planned breech birth at home clearly illustrating baby lifting her legs to flex her head (necessary for birth of the aftercoming head). It also shows how quickly breech babies can be born (this is the woman’s third baby), the midwife makes a very good catch of this little one! click on link Breech homebirth

There is also a lovely DVD you can buy which tells one woman’s story of deciding which birth was right for her and her baby. its called A Breech in The System. See the trailer here  and order your copy here

Of course I’m not saying all babies can, or should be born vaginally, but many can, and women should be given balanced information so they can make informed decisions about their care.