I felt compelled to comment on a great blog my the brilliant Rebecca Wright today. It can be seen here entitled “Are you a birthkeeper? Then don’t catch babies.” She was commenting upon the language used by birth workers in a facebook post which said “because maternity care providers are not serving mothers’ needs, more doulas and non-medically trained supporters being called on to catch babies.” She made great comment about mothers being the ones who should catch their own babies and why.

I’d like to elaborate further on my comments here, as this is an interesting subject, and I didn’t want to fill Rebecca’s site with my ramblings.

I was privvy to a conversation last year about the midwife’s role, brought about by the looming end to legal independent midwifery care. One party said when Independent midwifery becomes illegal we will be doing what doulas do anyway. The other camp were vehermently defending the title of midwife and not wanting to be compared to the service a doula provides. The arguement got heated (as is the way with passionate women!), and it was mentioned that women dissatisfied with their maternity care were indeed employing doulas to attend their births. Further heated discussion about the legality of this followed.

This got me thinking about what Independent or Authentic midwives do at a birth. I’ve been very honest over the past few years, telling my clients that I won’t actually be delivering their baby, they will. In fact most of my time (between the nurturing/ loving type of things) is taken up writing notes and drinking tea. I need women to realise that its not like on telly where the doctor heroically swoops in at the last moment to pull the baby out. It is the woman’s body, love, sweat and pure determination which get the baby born.

Several years ago I noticed that some women reach down to receive their own babies at the point of birth, but some are ashamed to touch themselves “down there,” especially if they are being watched! As a student midwife I recall watching my mentor move a woman’s hand away so she herself could ‘do’ the “delivery”. I’ve never been very directive myself, and have learnt the most by observing what women do naturally. Some women need to be informed that catching their own baby is possible as the power has so often been taken away from them. Professionals sometimes forget that they are there to serve the needs of the mother and baby – and not tell her what to do! (another post brewing on the balance of power). I remember telling a friend pregnant with her second child that I thought she could catch her own baby, for a number of reasons. I had seen many women slow down the birth of their baby if it was coming quickly and others who protect their own body in this way, giving tissues time to stretch (after practicing 11+ years I have never seen anything worse than a second degree tear). My friend did catch her own baby and tells all her friends that they can too! 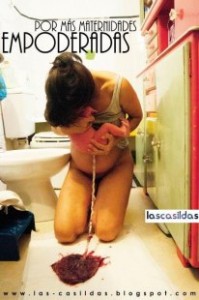 I’ve been mulling over what it means to be a midwife, what Independent midwives can call themselves, and how they can still serve women after October this year. I’ve also been thinking about what difference there would be between what a doula or I could legally do at a birth. There is potential for several posts on this, so I’ll try to stick to the current theme.

As a midwife I know it is the woman’s baby and not mine. I’m sure he prefers his mothers touch to mine, and encourage women to receive their own babies. I’ve shied away from unessesary internal examinations, and refrain from telling women how, or when to push, because I have attended many births where the mother does something totally unexpected and it turns out brilliantly. I remember being present at a birth centre birth where I was the second midwife. The woman was in advanced labour and spontaneously pushing with her first baby . We were prevented from being nosey, birth coach midwives, as visibility in the room was poor. The lights were dimmed and the water was a little cloudy, so our torch light couldn’t penetrate the water. Despite our efforts with torch and mirrror we could see nothing. I was concerned that I wouldnt be able to help her prevent a tear if I couldnt see when to tell her to pant, or give smaller pushes. As she pushed she spontaneously reached down and told us that she could feel the baby advancing, and before long told us baby was emerging. She lifted the baby triumphantly to the surface knowing she had done it all herself! We examined her perineum a while later and she had no tears. I told myself that women can obvoiusly prevent tears better than I can with all my experience.

I cannot bear midwives or doulas who brag about their ‘catches’ or how many deliveries they’ve done. I’ve no idea how many births I’ve attended (although it must be several hundred by now), and feel that keeping numbers makes it into some unsavoury sort of competition (like notches on a bedpost), rather than a unique event in someone’s life! Its a shame this bad habit starts in midwifery training where students have to get 40 deliveries to qualify as a midwife. Its not about numbers, its about people. I fail to see what student midwives learn when they are shoved into rooms to deliver a baby at the last minute, without knowing the woman, just to get their numbers. It can’t be nice for the mother either.

Being an authentic midwife means having the wisdom to not do everything you’ve been taught to do. The past 10 years of practice have been about unlearning the medical model, and learning from women. I like to think of it as a reverse Ina May Gaskin midwifery journey. A journey back to basic loving care, and being a birth keeper for the women and babies I serve.

Last word from Rebecca Wright: “Not all doulas or midwives are birthkeepers, of course, but the essence to me of this concept is exactly what you express here: service to mothers and to birth. Birthkeeping (and authentic midwifery) to me is about holding mothers and babies at the centre of their own experience, bringing with us whatever skills or talents we possess that are needed in that space, but always with humility and discernment.”

Thank you Rebecca for fueling my fire. xx