The Premier screening of Toni Harman’s new film will be shown globally on 20th September 2014.
Following the successful screening of her previous film “Freedom for Birth” last year, I am pleased to be able to share her new film in Glastonbury.

“Microbirth” is a new feature-length documentary looking at birth in a whole new way; through the lens of a microscope. Investigating the latest scientific research, the film reveals how we give birth impacts the lifelong health of our children and potentially could even affect the future of humanity.

“Microbirth” explores several possible plausible explanations. One hypothesis is that if normal vaginal birth is interfered with or bypassed completely because of Caesarean birth, this could alter the “seeding of the baby’s microbiome”, the critical transfer of bacteria from mother to baby at birth. Scientists suggest this could lead to the baby’s immune system not developing to its full potential. Another hypothesis is the actual process of vaginal birth, including the cocktail of hormones produced during labour, could profoundly affect the baby’s immune regulation and metabolism.

The film’s co-director Toni Harman says, “Caesarean Sections are essential and often are life-saving. However, up until now, no-one has really looked into the long-term impact. This emerging research is painting an alarming picture in terms of future health across populations. There may even be repercussions for the future of humanity. And yet, up until now, I don’t hear any alarm bells ringing.”

From  7pm to 9pm for the film premier, followed by after film discussion.

Tickets £5. All proceeds will be donated to Towards tomorrow Together

Following on from my “Am I Allowed post” I phoned my dear friend and former colleague Mary Cronk. As well as a good chat with each other, I obtained her permission to post her assertiveness phrases. She re-quoted the phrases that I know by heart, and have recommended to many women. I had the pleasure of working with Mary Cronk for 5 years as an Independent Midwife, and a further 2 as co-teacher of “Once More Unto The Breech” workshops. She is a true Midwife and has spent her life helping women achieve positive birth experiences. 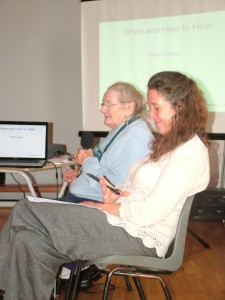 Mary Cronk is an expert in breech birth who has shared the skills of breech birth with midwives and doctors across the United kingdom. She was awarded a MBE for her services to women.

You may find these phrases useful, particularly if told that you are “not allowed” to have your baby at home, or you “have to” be induced, etc.

“I am sure that many others will explain your absolute right to refuse any procedure for any or no reason. The law, and good practice is quite clear. A sensible person will listen carefully to any explanations to why a procedure is proposed, and then should she choose not to have XY or Z she just says no or no thank you. The “allowing” is done by YOU. An asssertive approach is worth cultivating. You may care to commit the following phrases to memory and practice them frequently in front of a mirror. END_OF_DOCUMENT_TOKEN_TO_BE_REPLACED 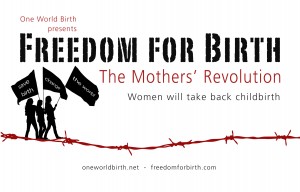 GIVES BIRTH TO THE  MOTHER’S REVOLUTION

Glastonbury film premier on Thursday 20th September 2012. was a resounding success! we filled 40 seats and had people sitting on the floor! £100 each was raised for The red tent project and The White ribbon Alliance, A lively discussion followed lead by our panel of experts Jenn Hodge (doula and service user), Kate Woods (doula and doula trainer), Eleanor Copp (midwife and hypnotherapist), and myself Joy Horner.

We watched the new documentary that reframes childbirth as the most pressing global Human Rights issue today is launching with hundreds of premieres all over the world on the same day, Thursday 20th September.

Freedom For Birth is a 60 minute campaigning documentary featuring a Who’s Who of leading birth experts and international Human Rights lawyers all calling for radical change
to the world’s maternity systems.

Hermine Hayes-Klein, US lawyer and organiser of the recent Human Rights in Childbirth Conference at the Hague, the Netherlands says, “the way that childbirth is being managed in many countries around the world is deeply problematic. Millions of pregnant women are pushed into hospitals, pushed onto their back and cut open. They are subject to unnecessary pharmaceutical and surgical interventions that their care providers openly
admit to imposing on them for reasons of finance and convenience. Women around the world are waking up to the fact that childbirth doesn’t have to be like this and it shouldn’t. Disrespect and abuse are not the necessary price of safety”.

Made by British filmmakers Toni Harman and Alex Wakeford, Freedom For Birth film tells the story of an Hungarian midwife Agnes Gereb who has been jailed for supporting women giving birth at home. One of the home birth mothers supported by Ms Gereb decided to take a stand.

When pregnant with her second child, Anna Ternovsky took her country to the European Court of Human Rights and won a landmark case that has major implications for childbirth around the world.

Toni Harman, one of the filmmakers says, “the Ternovsky vs Hungary ruling at the European Court of Human Rights in 2010 means that now in Europe, every birthing woman has the legal right to decide where and how she gives birth. And across the world, it means that if a woman feels like her Human Rights are being violated because her birth choices are not being fully supported, she could use the power of the law to protect those rights. With the release of “Freedom For Birth”, we hope millions of women become aware
of their legal rights and so our film has the potential to spark a revolution in maternity care across the world. In fact, we are calling this the Mothers’ Revolution.”

A local screening of Freedom For Birth will take place at:

Tickets £4 in advance or £5 on the door (concessions available). All profits to the local Red Tent Project and The White Ribbon Alliance charity.

With after film discussion with panel of local
experts including midwives, doulas and service users.

Additional information about Freedom For Birth can be found on the website: http://freedomforbirth.com

Each screening is being organised by local birth campaigners.

The film has been selected for screening in the Cambridge Film Festival on 20th September. http://www.cambridgefilmfestival.org.uk/

Toni Harman and Alex Wakeford are a filmmaking couple who have set up a cross-media global film project called One World Birth to provide educational videos featuring the world’s leading birth experts  http://oneworldbirth.net

Freedom For Birth is Harman and Wakeford’s third documentary film about birth. They were inspired to make films about following their own difficult birth of their daughter four years ago. A cascade of interventions in their birth led to an emergency
caesarean section.

A wonderful film about midwives work, including helping support communities after natural disasters. Very moving indeed. I’ve seen it twice and have been moved to tears each time. click on the link below to view.

Peace on earth begins with birth